Two pieces of news dominated an otherwise slow week. Taking them in order of appearance, last Friday brought a very encouraging Employment Situation Report. Job creation in December was good, if not spectacular at 156,000 new non-farm jobs. There were also revisions to the October and November reports that added a total of 19,000 jobs over the two months bringing those months to 204,000 and 135,000 new jobs respectively. What made people sit up and take notice however was an 0.4% uptick in average hourly earnings–the second healthy gain in the last three months and pushing the year-over-year increase to 2.9%.
Glass half-empty types will instantly understand that every such gain makes the Federal Reserve’s projection of three rate increases in 2017 more likely. Half-full observers know it means more people can buy houses.
We think the glass was filled by the second bit of news. The cost of buying came down a notch.
Department of Housing and Urban Development (HUD) Secretary, Julian Castro, announced a reduction in the FHA annual insurance premium, effective for loans closing or being funded on or after the 27th of this month. FHA’s insurance fund neared insolvency during the housing crisis and to rebuild it both the upfront and annual premiums were raised several times. The annual premium ratcheted up 150 percent. The announced reduction for most loans will be 25 basis points (bps).
Castro says the reduction will save the average FHA borrower $500 this year, and returns the annual premium almost back to pre-crash levels. The annual premium was reduced by 50 bps almost two years to the date of this newest cut.

That wasn’t the only notch taken out of housing costs this week, but the second might only apply to those who act fast. Freddie Mac announced a second consecutive decline in interest rates. As we said last week, one drop in rates does not a trend make, and neither does a second one. Still, rates that ended the year at 4.32% are now down 20 basis points. It is interesting that so far rates are following the same pattern they did last year, peaking at the year’s high in the last weeks of 2015 and starting what that time turned into a long-term decline the first week of 2016. We aren’t predicting or even optimistic about a repeat, but wouldn’t it be nice. 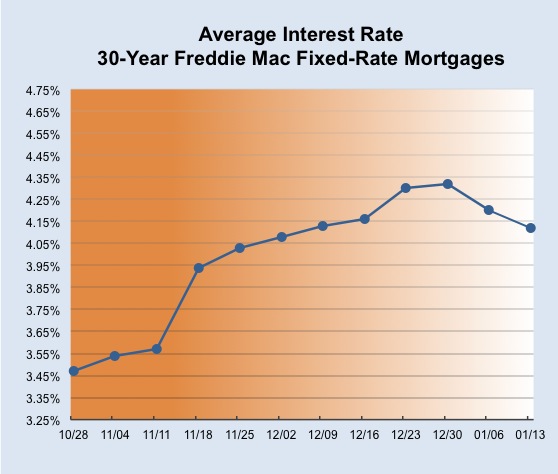