by Greg Timms
The Old Year and our two-week break has left us with a lot of make-up work. While sales and pricing data dominated the usual end-of-month flood and was largely positive, the Census Bureau’s construction numbers took some of the edge off.
The two backward looking reports on home sales–new, and existing–continued to show a strong fall selling season while pending sales, a leading indicator, were a little unsettling.
New home sales, which seem to alternate good months with not-so-good ones, rose 5.2% in November, pulling out of a 1.9% slump the month before. The seasonally adjusted rate of 592,000 units was second only to June for the year-to-date and was 16.5% higher than the pace a year earlier.
Existing home sales were higher for the third straight month. Sales topped October’s by only a fraction, 0.7%, but it was good enough to make November the strongest month since February 2007.
Pending sales were the lowest since January and the 2.5% loss is discouraging vis-à-vis the sales outlook for the next few months. Lawrence Yun, chief economist for the National Association of Realtors (NAR) said the “brisk” uptick in mortgage rates during the month along with inventories that continue to be far from adequate, “dispirited some would-be buyers.”
Construction data indicates that little inventory relief for “dispirited” new home buyers is in the immediate offing. While housing completions were up strongly (15.4% from October), permitting and housing starts lost a lot of ground. Permits fell 4.7% for the month and 6.6% year-over-year. Housing starts dropped even more dramatically; they were 18.7% lower than in October and 6.9% below the November 2015 level.
All the numbers from the five home price reports issued in the last two weeks were exuberant to say the least. Three of the reports were for October and Case-Shiller, the Federal Housing Finance Agency, and Black Knight Financial Services, while not agreeing among themselves on exactly how much prices were up, posted October estimates that were very true to those in recent months; two showed even faster increases. All three put the year-over-year appreciation at 5.6 to 6.0%
If October was exuberant, two November reports were ebullient. CoreLogic upped the annual change from 6.7% in October to 7.1% in November while NAR’s year-over-year number jumped 8 basis points to 6.8%. Nary a sign of the slowdown that analysts have been predicting for months.
There was no holiday respite for Interest rates. The 30-year fixed-rate mortgage hit 4.32% during Christmas week, a 32-month high, but reversed course this week, falling 12 basis points (bps). Despite the 90 bp increase since October 1, Freddie Mac says the average rate for the entire year was 3.65%; the lowest since it started keeping records in 1971.

Don’t forget that new loan limits kicked in on January 1. The increases were not huge–conventional limits went from $417,000 to $424,100 with limits in “high cost areas” rising proportionally–but maybe up just enough to make your purchase or refi more doable. 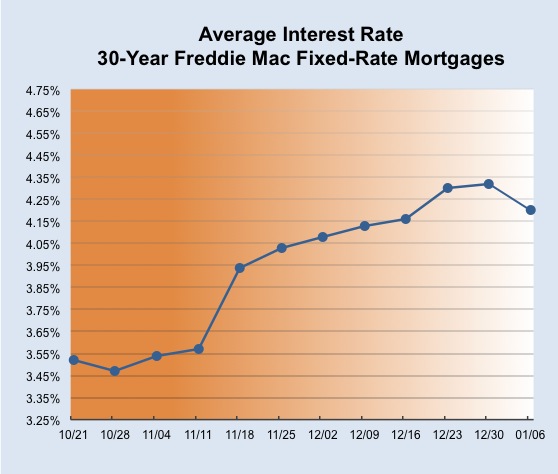