by Greg Timms
The bond market went a little crazy last week, and mortgage rates followed. By Monday of this week most lenders were quoting 4.0% for a 30-year fixed-rate mortgage (FRM). The market calmed a bit midweek, and by Thursday Freddie Mac reported a slight easing to 3.94 %.
The speed of the increase was close to unprecedented. Rate analyst Matthew Graham said on Monday that the previous three days had seen rates move higher at a pace that was only matched by the three worst consecutive days of the 2013 “taper tantrum.” That was the period when markets reacted to the Federal Reserve’s announcement of a reduction in the quantitative easing program. But Graham added, “If there’s one saving grace apart from the platitude about 4% still being relatively low in the biggest of pictures, it’s that the mortgage payment on a $200,000 loan would only be $14 higher today vs. (last) Thursday.”
We would add another “saving grace.” One year ago, per Freddie Mac, the 30-year FRM rate was 3 basis points higher than today. And look where we have been since then.
Mortgage activity, both purchase and refi, responded quickly to the upturn in rates, and the Mortgage Bankers Association (MBA) reported that application volume was down across the board, especially for refinancing which dropped 11%. It didn’t help that the business week was shortened by the Veterans Day holiday on Friday.
But there was good news–exceptionally good news–as well. Housing starts, which had fallen unexpectedly in September due to a huge loss in the multi-family sector, came roaring back in October, jumping 25.5% for the month and landing 23.3% ahead of last year. The increase was primarily due to the multi-family construction regaining its footing, but single-family starts were up more than 10% and are now at a seasonally adjusted rate of 1.32 million, 23% ahead of last year.
Permits, which had lagged in late summer, also were up slightly, building on a solid increase in September. They too are at a recent high of 1.23 million.

There won’t be an update next week, but we are guessing you will probably be too busy eating to miss it. The following week will be chock-a-block with housing news so we will catch up then. Have a wonderful Thanksgiving and if you are traveling, do so safely. 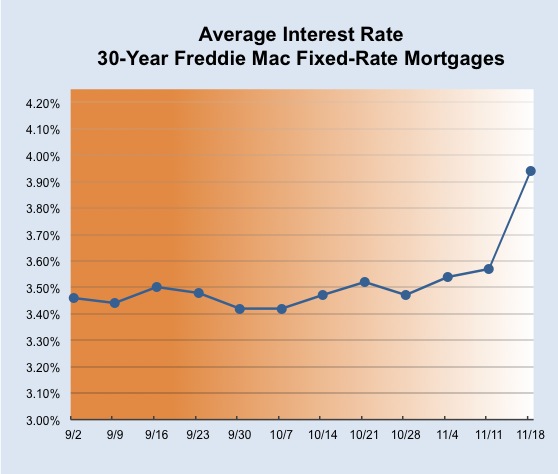