by Greg Timms
Is the end of seemingly endless rent hikes at hand? Laura Kusisto reports in the Wall Street Journal that apartment rents have actually come down in some of the nation’s priciest cities this quarter, perhaps the first sign that the six-year boom in rents is ending. It is a tiny beginning–rents are down by 3% in San Francisco, 1% in New York and have dipped by fractions in Houston and San Jose–but it marks the first declines in those markets since 2010.
Furthermore, while rent growth still averages 4.1% nationwide, increases have slowed for four straight quarters and have even turned negative in key regions. This suggests, Kusisto says, that the overall market could be headed lower.
Those cities with the highest rents are likely also those that offer the best job opportunities to Millennials as they enter the work force. High rents have been cited by some studies as being, along with student loan debt, major reasons why Millennials are unable to save up for buying a home.
While it may take a while for any rent relief to be wide-spread, Catey Hill, an editor at MarketWatch suggests an alternative. Get a roommate. Not a terribly original idea but her numbers are compelling.
Many renters already share their space, with a significant other or perhaps with someone they had never met before the moving van showed up, but for those living alone, a roomie can mean significant savings. A person who opts to share a two-bedroom apartment and splits the rent 50/50 can save an average of $470 a month over the cost of occupying a one-bedroom apartment alone. And those pricey cities where millennials flock, the savings could be even greater; $1,106 in San Francisco, $810 in Boston, $564 in San Diego, $546 in Portland.
A few years of squirreling away such savings could substantially speed up acquiring a downpayment.

Actual housing news was in short supply this week, limited to the Census Bureau’s report on August construction spending which continues to be flat. Residential spending was down slightly with single family construction losing 0.9%, the third straight monthly contraction, putting it 1.5% behind August 2015. Multi-family construction remains about the only bright spot in the whole report. It was up 2.4% for the month, and is running almost 14% ahead of last year.

As hurricane Matthew bears down on the east coast, we hope you all stay safe.
— 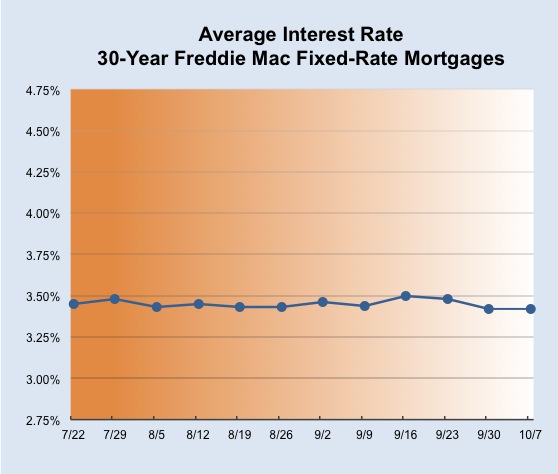