New Homes on the Way

Despite a month-long tease by way of comments from various board members, the September meeting of the Federal Open Market Committee (FOMC) came and went this week leaving rates untouched. A hike in the fed funds rate did get three “yes” votes, two more than in August.

Whether in reaction to the FOMC decision or not, Freddie Mac said its 30-year fixed-rate mortgage gave back some of last week’s 6 basis point increase, retreating to 3.48%. Maybe more important than the 2-point dip is the hint that rates may not move inexorably upward.

Existing home sales declined for the second straight month in August, falling 0.9% from July to an annual rate of 5.33 million. Condo sales did reclaim part of their near 13% July nose-dive, rising 10.5%, but single family home sales lost 2.3%.

National Association of Realtors Chief Economist Lawrence Yun blamed the slowing sales on tight inventories and rising prices as evidenced by the Federal Housing Finance Agency Home Price Index. It rose nationally by 0.5% compared to 0.2% in June, a pattern repeated in most of the nine census divisions. The year over year gain also accelerated slightly from June which supports the trend CoreLogic noted earlier this month.

After hovering in a narrow three-point range for the last nine months, the National Association of Homebuilders Housing Market Index finally busted loose, rising six points to tie the post recession high reached last October. The index, which measures home builder confidence in the new home market, shows recovering satisfaction with the current level of sales activity and the prospects that activity will continue strong over the next six months.

Unfortunately, that confidence wasn’t reflected in the following day’s August residential construction stats. Building permits continue to lag behind the numbers authorized a year earlier and were lower month-over month for the third consecutive period, this time by 0.4%. The drag came from multi-family permitting, which declined by more than 8% while single family permits reclaimed the 3.7% lost in July.

Housing starts were down 5.8% from a month earlier, with the change shared fairly equally by the single and multi-family sectors, and up .9% compared to last year. Housing completions also fell compared to July, but are still running way ahead of August 2015.

The good news from the residential construction data is the potential for expanding new home inventories. There are over a million units of housing now under construction with work yet to start on another 100,000+ permitted units.

Another flood of sales and pricing news is on the docket for next week. Given the trend of existing home sales, the pending sales report is the one to watch. 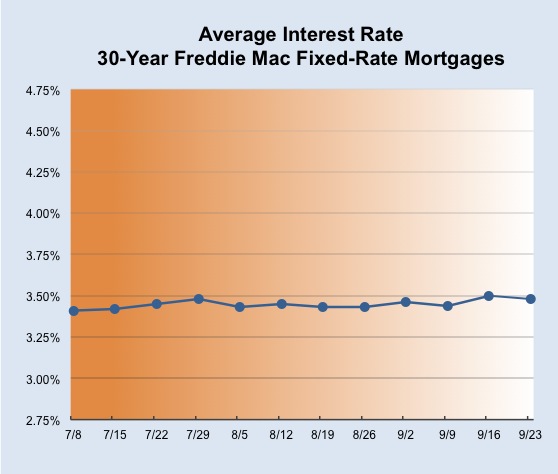