A Tale of Two Reports

The contrast between the two July home sales reports that came out this week was pretty glaring. New home sales came in with an unexpected 12.4% increase over June and were up 31.3% from a year earlier. And everyone did a happy dance. Then the National Association of Realtors (NAR) released its existing home sales report.

But let's look first at the good news. New homes sold at a seasonally adjusted annual rate of 654,000 units, up from 582,000 in June and the highest rate in nine years. Often the actual sales count for the month isn't as strong as the annualized and adjusted estimate but that wasn't the case this time. There were an estimated 57,000 homes sold during the month compared to 54,000 in June and 43,000 a year earlier.

Sales were strong in three of the four regions, especially in the Northeast, up 40.0% from June and 25% from the previous July, but were flat in the West, completely unchanged from the previous month. Even so, the region's sales remained more than 11% higher than a year ago.

On the other hand existing home sales were relatively dismal and NAR placed much of the blame on inventories, which were shrunk on an annual basis for the 14th consecutive month. A 4.7-month supply is well below the six months considered a balanced market. NAR said these inventory pressures are beginning to affect not only choice, but affordability as well.

NAR Chief Economist Lawrence Yun said "Severely restrained inventory and the tightening grip it's putting on affordability is the primary culprit for the considerable sales slump throughout much of the country last month. Realtors are reporting diminished buyer traffic because of the scarce number of affordable homes on the market, and the lack of supply is stifling the efforts of many prospective buyers attempting to purchase while mortgage rates hover at historical lows."

Sales were down 3.2% from June and were 1.2% lower than in July 2015. It was only the second time in 21 months that sales failed to exceed those a year earlier.

Condo sales were hit even worse, a 12.3% sales drop, and Yun said that was also a reflection of tight inventories. "With new condo construction barely budging," he said, "and currently making up only a small sliver of multi-family construction, sales suffered last month as condo buyers faced even stiffer supply constraints than those looking to purchase a single-family home."

There was good news from a market recovery standpoint. Distressed homes had the lowest share of sales since NAR started tracking them in 2009 and investors bought only 11% of all homes sold, back to pre-crash levels.

All in all, a mixed bag this week. 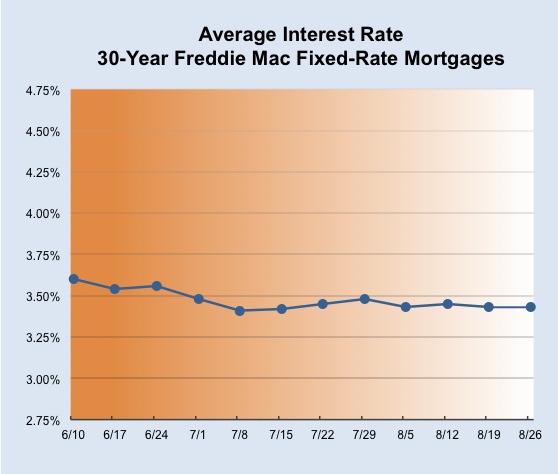