It was an exceptionally slow week on the housing front but there were a few news nuggets scattered around. The Census Bureau's report on construction spending shows an overall slowdown for what had previously been a real star of the recovery. Overall spending, which includes both public and privately funded building of schools, office buildings, hotels, roads, and everything else was down 0.6% from the previous month and remains only a sliver (0.3%) higher than in June of 2015.

Housing however is holding its own. Spending on residential construction–which is almost entirely a private sector activity–was unchanged from May but, so far in 2016, it is running 7.7% ahead of the first six months last year. Single-family construction is up 10.6% year-to-date compared to 2015.

While all of the major home price indices for June appear to show home price appreciation is cooling nationwide, some areas with high demand and thin inventories are seeing a surge in prices due to bidding wars. Principal CoreLogic Economist Bin He writes in the company's blog that multiple offers giving are driving sales prices well above the listing price in several cities, especially in California and Washington. In Santa Clara, for example, eight of ten properties recent sold for more than the listing price; in both Milpitas and Fremont it was seven in ten.

Of the sales analyzed by CoreLogic the boost in prices ranged from an average of 3.3% above list in Maple Valley, Washington to 12.2% in San Francisco. Bin He points out that inventories nationwide average a 3.75-month supply while in Washington it is 2.04 months and in California 2.6 months.

The post-Brexit decline in interest rates moved Black Knight Financial Services to examine changes in the refinanceable pool only two months after its last such analysis. The company said the 15 basis point drop in the first weeks after Brexit gave another 1.2 million homeowners an incentive to refinance, bringing the pool to 8.7 million homeowners, the largest since late 2012.

Black Knight points out that even where the monthly mortgage payment reduction is small, refinancing may result in substantial savings for those who can rid themselves of FHA or private mortgage insurance requirements.

Finally, despite low interest rates and a lot of other headwinds, Freddie Mac posted a $1 billion profit in the second quarter. This is bigger news than it may seem. The company lost nearly a billion in the first quarter of 2016 and it was expected it would need to borrow once again from the U.S. Treasury. Instead it will pay taxpayers a huge dividend. 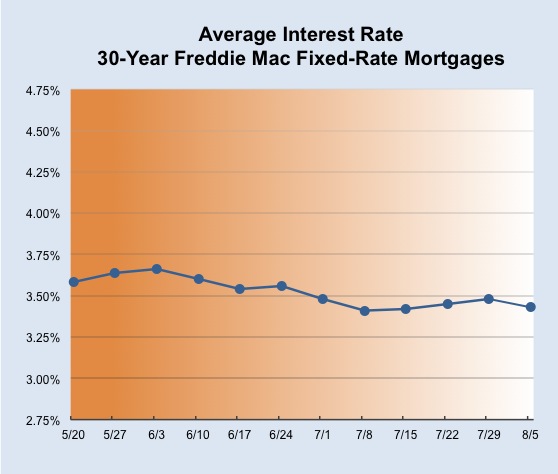