The two remaining reports on June home sales are out and both showed their respective markets recovering from tough sledding in May. Sales of newly constructed homes, which had suffered a 6.0% drop the previous month managed a 3.5% recovery in June. At a seasonally adjusted annual rate of 592,000 units, new home sales were a more than significant 25.4% ahead of sales in June 2015.

Inventories remain tight, with only a 4.9-month supply of new homes available for purchase. Of the 54,000 homes that the Census Bureau reported were sold during the month on a non-adjusted basis, 18,000 were gobbled up before construction was even begun.

Pending Home Sales also bounced back from the negative, but by only a slim margin. The National Association of Realtors' (NAR's) index measuring new home purchase contracts eked out an 0.2% gain in June following a 3.7% downturn in May. The index is up 1% from last year and is at the second highest level of 2016, second only to April.

In publishing the pending data, NAR noted that the market did not benefit as much as it might have from June's near all-time low interest rates because of affordability constraints and tight inventories.

The week also saw the last two home price reports from May. The S&P Case-Shiller Indices have been renamed and are now the S&P CoreLogic Case-Shiller Indices but the old numbers and methodology march on. The National Index which covers all nine census divisions was up 5.0% from May 2015 to May 2016 and rose 1.2% from April. The 20-City Composite Index, the one usually quoted by the media, gained 5.2 % for the year and 0.9% on a monthly basis.

Black Knight Financial Services also weighed in with its May Home Price Index with a 1.1% gain for the month and 5.4% for the year. While the two indices are in line, the Case Shiller gains were smaller than in April while Black Knight showed no slowdown in appreciation.

There is always a lot of white space on the calendar the first week of each month, but something interesting usually turns up. We await with anticipation. 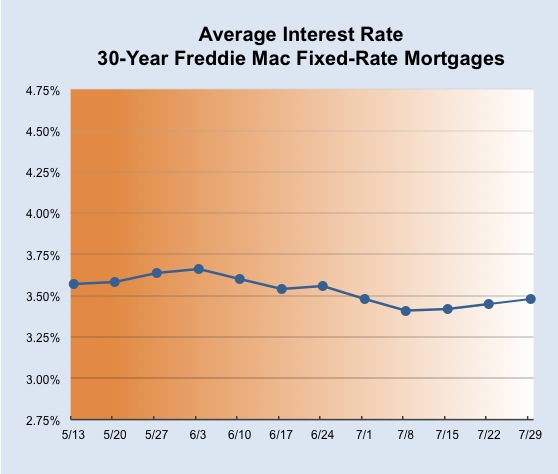