A Fluke And a Bounce

The economic picture brightened considerably last week with the release of the June Employment Situation by the Bureau of Labor Statistics. The news that 287,000 jobs had been created that month placed the previous report for May in the category of a fluke, albeit a big one. That only 38,000 jobs had been created was more than disquieting; playing a big role in the Federal Reserve's decision to forego a rate increase at its June meeting. The May report was downgraded even further last week, to 11,000, but the focus was all on the big June bounce.

How low can rates go? Even if they have reached rock bottom–most experts are hedging their bets–Freddie Mac is guessing they won't exactly zoom back up. The company's economists, weighing in with estimates of the impact of the UK exit from the European Union, have knocked down projections for average 2016 and 2017 30-year mortgage rates by 30 and 50 basis points respectively to 3.6% and 4.0%.

These low rates are expected to continue breathing life into refinancing. Freddie Mac has raised its forecast for that share of mortgage originations by 8 percentage points this year, to an average of 49%, a $100 billion increase in volume. So far they seem on point; the Mortgage Bankers Association reported that refinancing increased by 11% last week despite the holiday shortened workweek and on top of a 21% gain the week before.

Many of those currently refinancing may have previously been locked into their existing loans by a lack of equity. It wasn't that long ago–the end of 2010 to be precise–when nearly 29% of mortgages in the U.S. were "underwater;" 15.2 million homeowners who owed more than their homes were worth. Black Knight Financial Services reported in its current Mortgage Monitor that a 2% increase in home prices in the first quarter of this year has lifted another 425,000 of those borrowers into positive territory, reducing the negative total to 2.8 million borrowers or 5.6% of those with a mortgage.

The company estimates that U.S. homeowners now have $4.4 trillion in "tappable" equity, an average of $116,000 per borrower. That is cash that could be pulled out through refinancing or a home equity loan or used toward purchase of a more expensive home.

Still, Black Knight notes that the number of underwater homeowners remains more than five times the 750,000 pre-crisis average. At the current rate of improvement that normal level should be reached in late 2018.

The existing home sales report next week should hint at whether low rates are translating into purchasing as well as refinancing. Stay tuned. 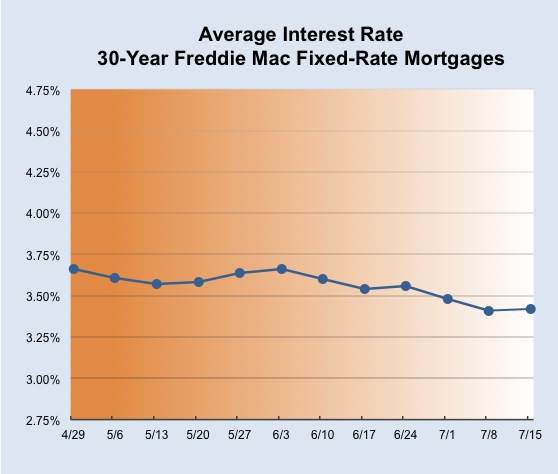