The Brexit vote continues to reverberate nearly two weeks after it stunned financial markets. Joe Weisenthal reported for Bloomberg Markets that investors are seeking sovereign notes all over the world and on Wednesday both the Japanese 20-year bond and the Danish 10-year saw their yields sink into negative territory. Yields on longer term U.S. notes continue to spiral down as well.

Here at home, after an initial stock market crash wiped out billions of investment dollars in a few days, the blowback from the UK vote has been largely positive, although that could certainly change. The Dow rebounded nicely, giving back what it had taken and the run on bonds has had the usual effect on mortgage rates. Freddie Mac puts the current 30-year fixed rate at 3.41%. This is down 15 basis points over the last two weeks and only 10 basis points higher than the lowest-ever rate reached in November 2012.

The record and near-record low rates have revived refinancing–again. The Mortgage Bankers Association said its Refinancing Index surged by 21% from the week before and the refinancing share of loan applications topped 60% for the first time since last February.

Refinancing has proven to have more lives than the average cat and it may not be over yet. Back in March, after rates had dropped back significantly from the late 2015 spike that pushed them into the 4% range, Black Knight Financial Services did an analysis of the "refinanceable" population of homeowners. The company estimated the 30 basis point decline to that date in 2016 (the 30-year fixed rate was 3.65%) had increased the numbers of those who could potentially benefit from refinancing by about 1.5 million or 30% to a total pool of about 6.7 million homeowners. The analysis was based on borrowers with existing rates in the 4.5% range.

The company also set forth a scenario under which another 15 basis point decline, taking the 30-year rate to 3.50%, would provide a refinance opportunity for another 2.1 million borrowers. Given where the Freddie Mac rate is today, refinancing appears to be a long way from dead.

The first of the May price indexes is in, this one from CoreLogic, and it appears that the long-prophesized deceleration in price increases may finally be occurring. Prices gained 1.3% from April in the wake of the two previous months which had average increases of 1.95%. Year-over-year increases in the company's Home Price Index have diminished every month since the beginning of the year, from 6.9% in January to 5.9% in May.

Quite a good week for those looking to buy or refinance. 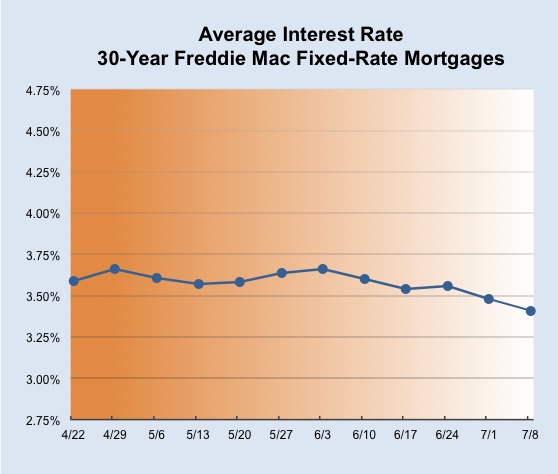