It wasn't expected, which made it that much more of a shock. We closed out this report last week noting that the stock market was way up in anticipation that voters in the UK would choose to remain in the European Union. Then of course they voted to leave, surprising almost everyone and sending an immediate chill over world economies.

The Dow Jones lost more than three times as much on Friday as it had gained on Thursday, closing down 611, and mortgage rates plummeted. Matt Graham, COO of Mortgage News Daily said post-Brexit Day One "joins ranks as one of the few days in history where rates have moved a full eighth of a point in a single day." There have been only nine such days in the last decade, he added. "Lenders who were quoting a conventional 30-year fixed rate of 3.625% on Thursday were easily down to 3.5% the day after the vote."

By Tuesday's open, the stock market was putting concerns about Europe aside and the Dow has now regained much of what it lost but CNBC says "the global bond market is signaling that there's plenty to fear." On Wednesday, the 10-year Treasury Note was up slightly but the 30-year continued to head lower, to 2.26%. Its all-time low yield is 2.223%.

Best executions (the lowest rates for the most desirable borrowers) were quoted at close of business on Wednesday at 3.375 to 3.5% for conventional 30-year mortgages.

There was other news. Homebuyers continue to be confounded by shrinking inventories and sales are beginning to reflect it. The National Association of Realtors May Pending Home Sales Index (PHSI) which tracks new sales contracts was down 3.7% from April and that month's index, which had originally posted a 5.1% gain, was revised down by more than a point. The index also fell below year-ago levels for the first time in 20 months, declining 0.2%.

Both Case-Shiller and Black Knight Financial Services came out with April home price figures and both said national prices were up by around 1.0%. Case-Shiller reported a more modest increase than Black Knight, 5.1% versus 5.4%, but both numbers would indicate that price increases are slowly lessening. Prices in several West Coast cities are rising much faster than national numbers–nearly twice as fast in fact. Among them are Seattle, Portland, and Walla Walla which are being followed closely by such other western locations as Cheyenne, Salt Lake, and Denver. 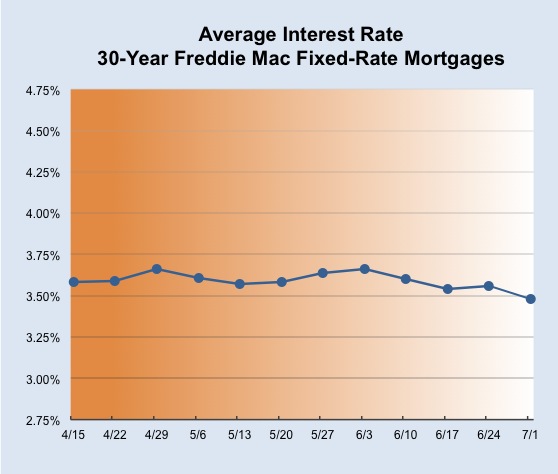