It was a busy week for housing news and it covered the gamut; positive, negative, and fair-to-middling.

The National Association of Realtors (NAR) said existing home sales reached not one but two new peaks in May; the fastest rate of sales since before the crash and the highest median price ever. Sales of all types of existing units were up 1.8% from April to an annual rate of 5.53 million units, 4.5% higher than a year earlier. It was the fastest clip since sales posted an annual rate of 5.79 million in February 2007.

NAR said this rising demand along with lagging inventory pushed existing home prices up 4.7% to a median of $239,700, a 51st straight month of annual gains. The May median was the highest on record, surpassing the previous peak of $236,300 set last June.

The report also noted that distressed properties have dropped to a near inconsequential share of sales. Five percent of May sales were of owned real estate while short sales were down to 1%. A far cry from 2009 and 2010 when short sales sometimes constituted a third of the market.

New home sales weren't nearly so upbeat. The May number wasn't all that bad; analysts had anticipated a 9.6% retreat from the huge surge in sales the previous month and the May sales fell by only 6%. The kicker however was that a chunk of the reported 16.6% April increase evaporated as sales were revised down from 619,000 to 586,000. May sales were at a seasonally adjusted annual rate of 551,000, up 8.7% from May 2015.

The fair-to-middling part was the residential sales report. Both building permits and housing starts moved less than 1% from their April levels; permits went up and starts were down, however they diverged significantly in their year-over-year performance. Residential construction starts were 10.1% above those a year earlier while permitting lagged 9.5% behind.

As we go to press, voters in the UK are deciding whether their country will remain in the European Union. The so-called Brexit election has roiled markets all week and opinions vary on how the U.S. might be affected. When it comes to housing, a vote to leave is expected to spur investment in U.S. securities, driving interest rates down. But foreign money might also pour into real estate, increasing competition and home prices.

At midday Thursday, the stock market was up strongly in what appeared to be a conviction that Brexit would fail at the polls. 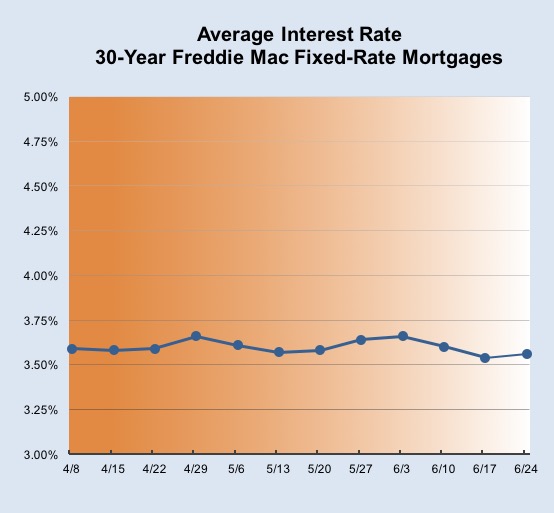