There is now some evidence for putting at least part of the blame for the enduring dearth of first-time homebuyers on student loan debt. The National Association of Realtors (NAR) recently conducted a survey, in conjunction with SALT, a consumer literacy program, on the topic. Respondents were student loan borrowers, none were homeowners and all were current on their student loans. The survey found that 43% owed between $10,000 and $40,000 while 38% had more than $50,000 in debt.

Nearly three-quarters of those responding said that their education related debt has delayed them from buying a home. The highest such responses (79%) came from those aged 26 to 35 who had between $70,000 and $100,000 in debt. Regardless of age and level of indebtedness more than half said they expect to be held back from homeownership by more than five years. The survey also found that this debt had delayed four of 10 respondents from moving out on their own after finishing college.

And speaking of debt, paying it off rapidly might soon bring an added benefit. Fannie Mae is about to start using "trended data" to determine payment patterns on credit card debt. A pattern of making larger than minimum required monthly payments will be factored into underwriting decisions and could help borrowers on the cusp of approval to make the cut.

The company, with the assistance of TransUnion and Equifax, two of the major credit reporting agencies, will begin looking back at applicants' minimum payments, actual payments, and account balances for up to 24 months to determine patterns. This underwriting change, which begins on June 25, will only apply to revolving credit accounts, not auto loans, student, or other types of debt. The company noted that borrowers who pay off their credit cards at the end of every month are 60% less likely to be delinquent on their mortgage than borrowers who only make their minimum payments, even if those minimum payments are made on time.

As expected, the May Employment Situation report put the kibosh on any plans the Federal Open Market Committee (FOMC) had to raise rates. Members had indicated that a hike at the meeting this week was likely, but that was before the Labor Department reported the worst job gains since 2010. FOMC's press release following the June meeting restated that increases would be "gradual" but gave no indication of any timing that might be involved.

Meanwhile, the rates that really count for consumers continue to fall. Freddie Mac said the 30-year fixed-rate mortgage dropped by 6 basis points for the second consecutive week, now averaging 3.54%. This is 46 basis points lower than that rate at this time last year. 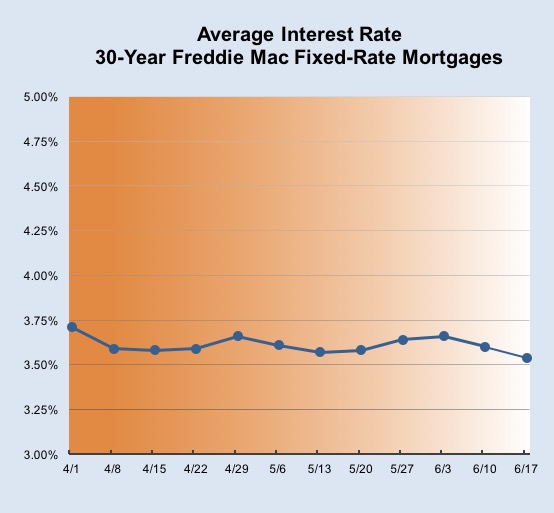