The highlight–or maybe lowlight is more appropriate–of the economic week was last Friday's job report for May. It was, to use a not so technical term, awful.

Instead of the 110,000 to 219,000 new jobs the experts were predicting, the Bureau of Labor Statistics reported that 38,000 non-farm jobs were created during the month. And that wasn't all. The April jobs number, originally reported at 160,000 was revised down to 123,000 new jobs and a second round of revisions to March made for total downgrades of 59,000.

Of course there were a few semi-bright spots in the report. Wages were up month-over-month by 0.2 percentage points and the unemployment rate dropped from 5.0% to 4.7% but that was largely due to a drop in the participation rate.

As in the past, reaction to the report contained some good news. Goldman Sachs and others called any increase in the fed funds rate at the next week's meeting of the Fed's Open Market Committee (FOMC) dead on arrival and that consensus in turn brought an immediate reversal in mortgage interest rates that had been trending up for the previous three weeks. Within hours of the Employment Situation report one analyst said, "If a lender was quoting 3.75% yesterday, they're likely quoting 3.625% today" on the same loan.

The declines continued into this week and as of Thursday morning the 10-year T-bill was down 17 basis points from a week earlier and Freddie Mac's 30-year fixed rate reversed its climb and fell to 3.60%.

While rates are down, home prices continue to rise. Two of the five major home price indices are out for April and demonstrate nearly total agreement. The National Association of Realtors said they increased 6.3% year over year and CoreLogic put the change at 6.2%. CoreLogic also quoted a rather stunning March to April increase of 1.8%.

Finally, a new survey by Freddie Mac on homeowners over the age of 55 found that most are confident they will be able to enjoy a financially comfortable retirement. A majority also said homeownership makes financial sense at almost every stage of adult life, whether or not one is married or has children. They also said they were very satisfied with their homes, their communities, and their quality of life.

Whether you are over the age of 55 or nowhere near it, we hope you are satisfied with where you find yourself as well. Cheers! 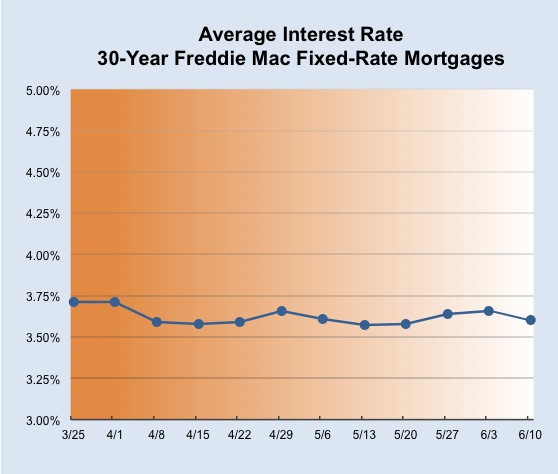