Two reports this week underline concerns that the housing market may be heating up too fast. Freddie Mac's economists asked how high is too high when it comes to home prices and a survey found buyers are increasingly afraid of competition as they hunt for a home.

Conducted by a national real estate company, the survey asked homebuyers what worries them most as they seek to buy. Twenty-six percent cited affordability, but competition is rising as a concern, up 8 percentage points in six months to 19%. As the third major response, tight inventory is the major driver of competition.

The survey also found that high rents are driving people toward homeownership; it was the major reason cited for entering the market by 25% of respondents and 50% of first time buyers, nearly double that answer given by first-timers in a survey last summer. Life events, such as the birth of a baby, were given as the number one impetus for buying, but life events and high rents were the only reasons given by more than 10% of respondents.

The second report noted the difficulty of identifying price bubbles because of the sheer numbers of U.S. housing markets. Freddie Mac's economists suggested a two-stage approach, first by "thinning the herd." They identified ten markets where the median home price to median income (PTI) ratio was higher than each areas' historic norms. They then applied the second stage analysis, looking at whether there was a geographic specific industry behind the price surge, if credit conditions (mortgage performance, employment) were stable, and finally if owners were using home equity to finance consumption.

By all of these standards Freddie Mac found little evidence of prices that are approaching a risk level among the ten (two cities in North Carolina, three each in Florida and Texas plus San Jose and Portland)–but they warned that leveraging–i.e. cash-out refinancing and growth of HELOCs–would be the "canary in the coal mine" in areas with fast-rising home values.

And speaking of home values, they do continue to rise. The S&P Case-Shiller National Home Price Index rose 5.2% on an annual basis in March, a slightly lower increase than in February. The widely cited 20-City Composite posted a 5.4% gain, identical to the previous month. And speaking of bubbly, Case-Shiller notes that prices in three western cities, Seattle, Portland, and Denver, continue to rise by double digits. 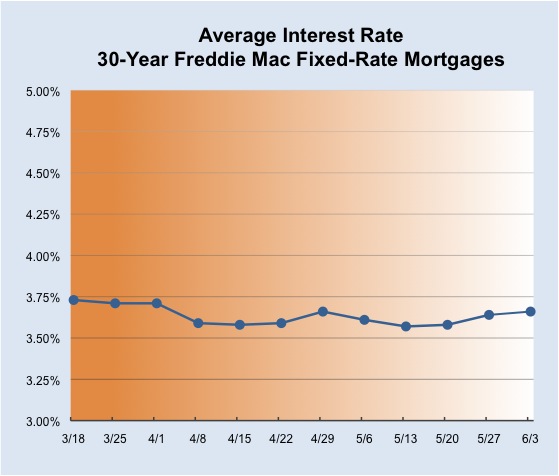