Even though, as we reported last week, existing homessold in January at the fastest pace in six months, not nearly so many potential homebuyers were rushing to sign purchase agreements. The National Association of Realtors (NAR) said this week that its Pending Home Sale Index (PHSI)–a forward looking indicator based on sales contracts, fell by 2.5% from December while analysts were looking for a positive number of around 0.5%.

While pending sales were 1.4% higher than in January 2015 and it was the 17th consecutive year-over-year increase, it was also the smallest one of that entire period.

The pull-back could mean a dip in sales in late February and in March, just as the much anticipated spring real estate market gets underway. Home sales are generally expected to close within 60 days of contract signing.

Lawrence Yun, NAR's chief economist, blamed a January blizzard for some of the decline in pending sales but said, "The recent acceleration in home prices and minimal inventory throughout the country appears to be the primary obstacle holding back would-be buyers." He continued on to hope that appreciating home values might entice more homeowners to list their properties, but "supply and affordability conditions won't meaningfully improve until homebuilders start ramping up production–especially of homes at lower price points."

Based on January construction spending numbers from the Census Bureau, Yun may not see much of a ramp up short-term. While overall construction expenditures were up slightly for the month, money spent on building single-family housing declined. It was a fractional loss however–just 0.2%–but still a loss, and that spending has in fact been relatively flat on a seasonally adjusted basis since September. At the same time spending on multi-family housing is up by nearly a third since last January and the National Association of Home Builders (NAHB) said this week that it now exceeds peak spending during the housing boom years. It is up nearly a third since the beginning of last year.

And again we speak of rates. As we went to press, Freddie Mac reported average current rates were up for the first time this year. The increases were small and the 30-year remains substantially lower than a year ago, while both the 15-year and the 5/1 adjustable are still under 3%. 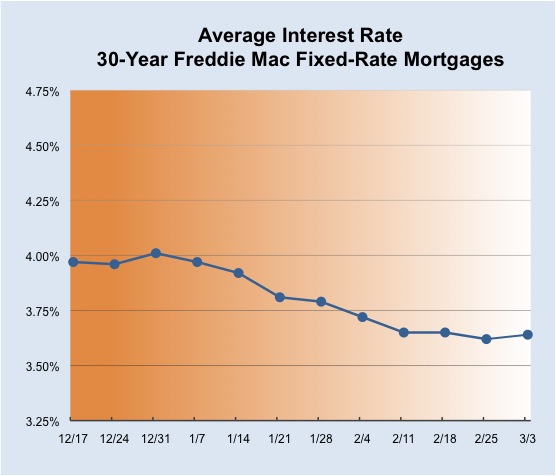 Related Articles
Economical Updates On The Brink Last week we reported that the rate of homeownership remains stagnant. This week we learned of a new survey from the Gallup people that seems to show that could be on the brink of change–maybe even massive change. The survey, conducted among both homeowners and non-homeowners, indicates that more than half of the latter don’t […]
Economical Updates Blizzard of Good News Good housing and economic news fell almost as thick and fast as snow on the East Coast this week. Hard to know where to start digging out. Proceeding chronologically, the first up was another very good Labor Department report announcing the creation of 235,000 new jobs in February. Below the headline number was some especially […]
Economical Updates Tough Sledding Despite taking a dip in December, existing home sales still closed out 2016 as their best year since 2006. The National Association of Realtors (NAR) said that over the 12 months an estimated 5.45 million single-family houses, townhomes, condos, and cooperative apartments changed hands. This was 200,000 more units than sold in all of 2015 […]