Mortgage rates have continued to dither and the answer to whether they are heading up or down even further depends on who you ask. Based on reports that came in for last week, we were prepared to report the good times were over. The Mortgage Bankers Association reported across the board increases with adjustable rate mortgages (ARMs) particularly hard hit; the 5/1 ARM rose 15 basis points.

The increases appeared to end the refinance renaissancelenders and homeowners had been enjoying since the first of the year. Turns out that reports of that demise may have been premature. Freddie Mac reported as we went to press that this week rates resumed their retreat; the 30-year fixed-rate mortgage is now down to 3.62%. Stay tuned.

The January existing home sales report from the National Association of Realtors (NAR) seemed more like a spring market summary than a month in the heart of winter. Sales of existing homes, while only 0.4%, still reached the fastest rate of sales since last July–a seasonally adjusted annual rate of 5.47 million. The demand, bumping up against continuing tight inventories, drove home prices up 8.5% year-over-year, the largest gain since the last real spring market in April 2015.

New home sales didn't fare nearly as well. January sales fell by 9.2% from December and were more than 5% below those in January 2015. Newly constructed homes sold at an annual rate of 494,000 units while analysts had been looking for a number around 520,000. Median prices also declined from a year earlier.

Both Case-Shiller and the Federal Housing Finance Agency reported price gains in December although neither came close to matching NAR's January number. Case-Shiller said its National Index was up 5.2% year-over-year, slowing from the annual increase in November of 5.4%, while FHFA said prices were up 5.8%.

Oil prices rose briefly and then flat-lined promptingGoldman Sachs to say it could have problems given its heavy lending to oil companies. The investment bank speculated that as much as 40% of its loans and loan commitments in that sector (a total of $4.2 out of $10.6 billion) might be problematic. Susquehanna Financial Group said Goldman Sachs is a small player in the market–Citigroup and Wells Fargo have much more at risk. And so the stock market continued its wild ride with fears about bank stocks joining those related to energy. 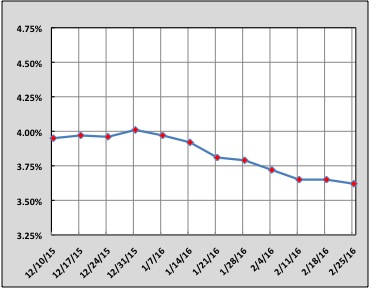