Interest rates are still fueling a resurgence of refinancing. The Mortgage Bankers Association (MBA) said refinancing applications increased by 16% for the second straight week and represented more than 65% of all mortgage applications, the largest share in a year.

Rates did appear to stabilize this week. The Freddie Mac Primary Mortgage Market survey results were unchanged and longer term T-bills regained some ground as both energy prices and the stock market rose in reaction to an agreement among oil producing nations to cap oil output.

It has been the jumbo mortgage loans (those exceeding $417,000) that have benefited the most from the recent rate rout. MBA rates for the 30-year fixed in that category dropped to 3.74% last week, the lowest since December 2012.

And speaking of jumbos, Inside Mortgage Finance reports that those loans, which are primarily the province of private lenders, made up 18.9% of first-lien mortgage lending last year, an increase of nearly 40%. At the same time, total originations were only up by 33.5%. It was the highest jumbo market share since 2005, but likely reflects home price increases in many major markets rather than beneficial jumbo interest rates.

Other housing news this week centered on construction and much of it was disappointing. Housing starts took an unexpected hit, dropping 3.8% in January from the revised December estimate of 1.143 million units. The Census Bureau put starts in January at a seasonally adjusted annual rate 1.009 million which was below even the most pessimistic of analysts' predictions. Most were looking for a number around 1.175 million. Permits fell as well, but by a less jarring amount, -0.2%.

Analysts attributed the disappointing numbers to bad weather which the East Coast in particular has had plenty of–but in addition, it seems that home builders just might not be feeling the love according to the most recent Housing Market Index (HMI) numbers from the National Association of Home Builders (NAHB). It slid another 3 points this month to 58. The biggest impact on the index has been the component gauging builders' perceptions of buyer traffic. That has fallen 9 points since November.

After a couple of really slow weeks, next week there will be an abundance of housing news with multiple reports on both home sales and house prices. Stay tuned! 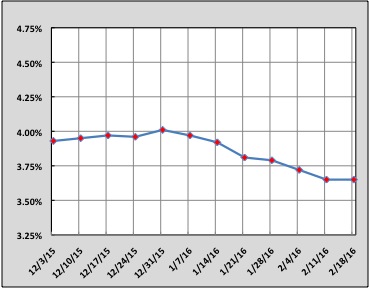