Interest rates dominated economic news again as the Mortgage Brokers Association reported that, by the end of last week most fixed-rate mortgages (FRM) had fallen back to spring 2015 levels while the 30-year jumbo FRM had an average rate last seen in the spring of 2013. The retreat continued this week with a huge drop in the 10-year T-bill rate and Freddie Mac's Primary Mortgage Market Survey reporting the 30 FRM at an average of 3.65%, hovering just above its 2015 low of 3.59%.

Not surprisingly, the MBA reported that applications for refinancing surged again as homeowners grabbed at yet another in a long series of absolutely final, you-will-never-have-this-opportunity-again, chance to lock in rock bottom rates.

Meanwhile, and certainly not unrelated to rates, the rout continued on Wall Street. The Dow is now down 800 points since the first of the year.

Federal Reserve Chairperson Janet Yellen testified before the House Financial Services Committee on Wednesday about the economy and direction of the Fed's monetary policy. While noting a lot of progress in employment and specifically in housing construction, she also pointed to energy prices, lower exports and other headwinds that slowed the overall economy in the fourth quarter of 2015. Expansion in gross domestic product slowed even more sharply, to an annual rate of "just ¾ percent."  Still she does see inflation finally reaching the Fed's elusive 2% goal "in the medium term."

Yellen hedged on any further move on rates saying that "economic conditions will evolve in a manner that will warrant only gradual increases in the federal funds rate" and that the Fed expects the rate to remain "for some time" below the levels eventually expected.

Since the December rate hike has had so little influence on mortgage rates it was probably more germane that Yellen reiterated the Fed's intention to continue reinvesting the proceeds from its huge holdings of Treasury notes and mortgage-backed securities as they mature. This should prevent any abrupt weakening in demand that might send long-term rates skyward.

Fannie Mae's National Housing Survey revealed a little bearishness on the part of consumers. The number of respondents who said it was a "good time to buy a house" fell to the lowest level in the survey's history and consumers also reflected discouragement over household wage prospects. Of course they overwhelming said they didn't expect rates to come down again either.

Another holiday shortened week coming up, but two pieces of construction news should keep it interesting. 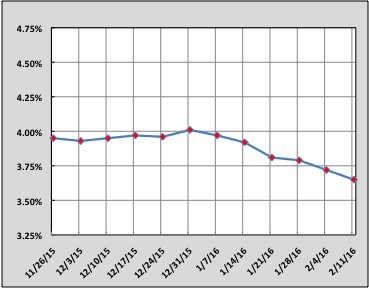