Concern rose this past week about a slowing economy, both globally and here at home. The U.S. stock market continued its recent cycle of alternating triple-digit swings and the 4th quarter GDP came in at a measly 0.7%, lowering projections for the year to around 1.9%.

The gloomy outlook however does not extend to the housing and mortgage markets according to Sean Becketti, chief economist for Freddie Mac.

"Market volatility–and the associated flight to quality–continued unabated this week. The yield on the 10-year Treasury dropped another 15 basis points, and the 30-year mortgage rate fell 7 basis points to 3.72 percent. Both the Treasury yield and the mortgage rate now are in the neighborhood of early-2015 lows. These declines are not what the market anticipated when the Fed raised the Federal funds rate in December. For now, though, sub-4-percent mortgage rates are providing a longer-than-expected opportunity for mortgage borrowers to refinance."

Freddie's rates have already drifted down 18 basis points over the first five weeks of the year and could continue that pattern for a while. When they do reverse course, Freddy says, the increase will be modest for the rest of the year and it has revised its projection for 2016 down by 0.1% to 4.3%.

Housing inventories will continue to loosen and home sales will rise to a projected 5.92 million this year from 5.71 million in 2015. Increasing inventory will ease demand and home prices will likely rise more slowly, 4.4% this year.

Purchase mortgage originations will be up and Freddie is optimistic about refinancing as well. It sees several factors that could keep the refinancing boom from ending as soon or as dramatically as expected. In addition to slower rate increases, homeowners are expected to take advantage of growing home equity to refinance out of adjustable rate mortgages or consolidate pre-crisis-vintage home equity lines of credit which have reset to higher payments.There is also a growing trend toward cash-out refinancing to access some of the home equity recovered through rising home prices.

If Freddie Mac is correct, we may be returning to the pattern that has usually existed in healthy recoveries but has been missing in this one–the housing industry driving the economic expansion. 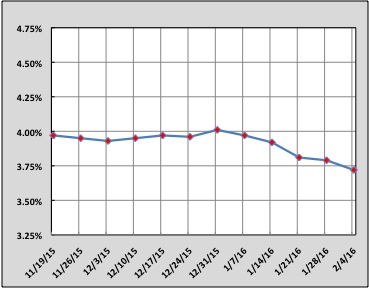