This week the Federal Open Market Committee held its first meeting since they raised the fed funds rate. In its news conference after the two day event a spokesperson said they were closely monitoring both global and domestic economic developments and "assessing their implications for the labor market and inflation."

Bloomberg called this a "soft-pedal back" from earlier statements and probably a signal that another rate hike will not happen at the March meeting as has been sort of expected. However, interest rates have not been waiting around on the Fed. They have been steadily retreating all month. Freddie Mac's 30-year rate is down 22 basis points since New Year's Eve.

A big part of the reason is the antics of the stock market. The triple digit swings that started right after the holidays have continued, with the Dow losing almost 1,500 points in 2016. The collapse of oil prices is stoking fears of a recession and thus a flight into bonds, holding rates down.

Moving on. All three home sales indicators for December are out with strong showings for both new and existing home sales. The National Association of Realtors (NAR) said existing sales posted the largest month-over-month increase on record, jumping by 14.7% to an annual rate of 5.46 million homes.

But it wasn't all sunshine and lollypops. NAR attributed at least part of the increase to a delay of many November closings into December because of problems with the new Truth-in-Lending Disclosure (TRID) rule. Even averaging the two months, the numbers weren't far out of line, and existing home sales are up 7.7% year-over-year.

The third indicator, pending sales, was also up–by the skin of its teeth. Signed contracts increased a tiny 0.1% over November. But still it was a home sales hat trick.

Home prices continue their upward trajectory. Case-Shiller reported its national index was up 5.4% year over year while the Federal Housing Finance Agency (FHFA) Housing Price Index called it at 5.9%. More important, the Case-Shiller November annual increase was larger than October's and FHFA's year-over-year gain was larger than in November 2014. Apparently the price gain deceleration everyone has been predicting remains just that–a prediction. 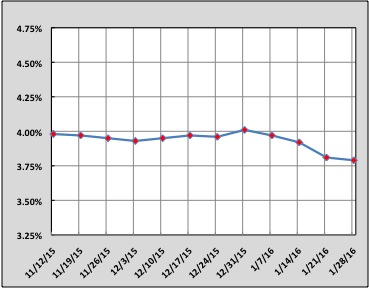