As we recall, we, along with most of the nation, were in shirtsleeves while we wrapped up the holiday shopping and partying last month. Still, reports this week indicate that an unseasonably warm December didn't do much for the construction industry.

First there was the National Association of Homebuilders Housing Market Index (HMI), a monthly measure of how new home builders feel about the current market and how optimistic they are looking six months ahead. This index was out front in predicting an end to the housing bubble, plunging toward record lows while home sales and prices were still surging. Then it was way behind other indicators during the recovery, returning to a more or less neutral measure only about a year ago, finally hitting a ten year high in October. While it was unchanged this month the HMI has declined 5 points or about 8 percent from that peak.

An uncharacteristic three point drop in the six months- from-now part of the survey dragged on the HMI this month. MBA's monthly survey almost always finds builders more optimistic about the future than confident in the present.

The December report on residential construction was also disappointing. Two of the three categories–housing permits issued and housing starts–declined, by 3.9% and 2.5% respectively. Housing completions improved but they have been fairly consistent for months, bouncing along at an annual rate in the high 900,000 units range and occasional crossing, as they did in December, over the million unit mark.

The "official" report on each month's new home sales comes from the Census Bureau and HUD late the following month but the Mortgage Bankers Association (MBA) surveys mortgage subsidiaries of new home builders to derive an early estimate from mortgage applications. MBA predicts an 8.1 percent drop in new home sales in December compared to November, down from 37,000 to 34,000.

In the non-construction arena, CoreLogic concluded in a brief article this week that, even in many pricy areas such as major California and East Coast cities, housing remains relatively affordable. They looked at four California counties and 11 metro areas nationally, comparing typical current mortgage payments adjusted for inflation with those at other peak periods. The payments today were 20 to 50% below local peak payments. For example, today's payments are 13% lower in San Francisco County than at its peak, down 42% in NYC, and 24% in Dallas. It's not the homes' price that has resulted in improved affordability, it's the interest rate.

Lots of data next week, unless the mega-storm that is forecast shuts down the computers and all the lights. 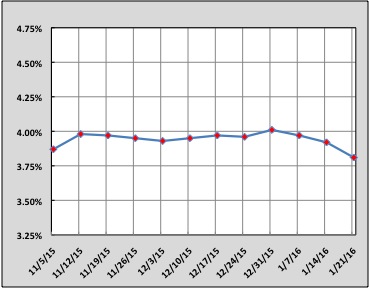