The bells have rung, the ball has dropped, and our two weeks of pretty much ignoring the world have ended. It's 2016 and we are happily back to the grind.

It was actually fairly quiet during the hiatus. The usual data was released, the usual year-end predictions rolled out of the economic think tanks, but there wasn't much that was unusual or startling.

To recap: Interest rates ended the last week of the year by topping 4%–although barely–for the first time since July. They didn't stay there long, moving back to where we left them two weeks earlier. Many economists are still, despite the December Federal Reserve rate hike, predicting slow and steady increases through the year. We'll keep you posted.

Reports on annual home price indices, most for October, were all over the place. While Case-Shiller's National Index called it a gain of 5.2% and CoreLogic topped everyone, reporting a 6.3% gain in both October and November, it is clear that price gains continue at their established levels. All four sets of data released over the last two weeks show month-over-month increases remaining well under 1%.

The results from the three major home sale metrics were mixed. The National Association of Realtors® (NAR) reported that November's sales of existing homes were at the slowest rate since April 2014 at an annual rate of 4.75 million units, a decrease of 10.5%. October's numbers were revised down from already negative earlier numbers. The two consecutive months of declines dragged the year-over-year number lower by 3.8 percent, the first annual loss since September 2014.

NAR's Pending Home Sale Index fared a little better, rising 0.9% from October to 106.9, a 2.7% increase from November 2014. The Index, based on contracts for home purchases signed during the month, has increased year-over-year for 15 consecutive months but NAR said this was the smallest gain in 13 months.

Newly constructed homes sold at a seasonally adjusted annual rate of 490,000 in November, a 4.3% increase for the month but that increase was over a sharply downgraded October estimate which chopped an identical 4.3 percentage points off of Octobers previously reported 10.7% gain.

The first few weeks of the year always brings to mind the roadrunner–his legs spinning frantically as he tries to pick up speed. This first week had little news other than a reeling stock market and interest rates seeking direction. Next week appears slow as well. Enjoy the respite–and Happy New Year. 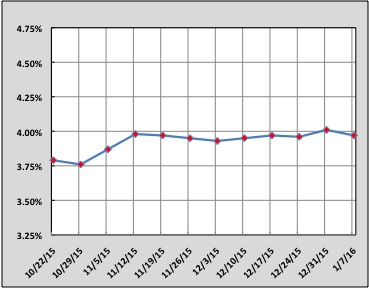 Related Articles
Uncategorized JUST SOLD! 17808 Villamoura Drive Poway, CA 92064 JUST SOLD this beautiful unit on the golf course. Spacious & open feeling home. Golf community in a quiet and peaceful setting close to shopping, schools, Lake Poway & hiking trails. RV parking area available. Garage will fit 1 car & a golf cart. Looking for a something similar? If you are thinking of buying or selling, […]
Uncategorized The days of bedroom, bath and price are dead Move over realtor.com, Zillow and Trulia — and take your old-fashioned data search tools with you. Your days on top of the real estate search heap are numbered, as are your listings that focus on bedroom, bathroom and price. Analytics that evaluate lifestyle, affordability and commute time are the new kids on the block that are about […]
Uncategorized Did You Know? Fixed Rate Mortgages Continue Falling…and falling… According to realtor.com, mortgage rates on fixed interest products are as low as we have seen them in 7 months. Here, an article by Rachel Stults on the statistics, and what's trending in the housing marke at realtor.com: