They finally did it and no one was the least bit surprised.

At their two day meeting that ended Wednesday afternoon, the Federal Reserve's Open Market Committee (FMOC) took the step they have been teasing markets with for months and raised the fed funds rate by a quarter point. It was the first rate increase since June 29, 2006 and all ten members of the committee voted in favor of it. The fed funds rate had been effectively at 0% since December 2008 after FOMC cut the rate 10 times in 14 months in an attempt to charge up a struggling economy.

Fed funds rate is the one at which depository institutions lend their funds to each other through the Federal Reserve. These loans are typically very short term–usually just overnight. By raising the rate the Fed hopes to make the overall money supply less liquid, driving borrowers and ultimately lenders to other slightly longer term loan alternatives. The ten Federal Home Loan banks are by far the largest lenders in the fed funds system although Fannie Mae and Freddie Mac are also active there.

Fed Chair Janet Yellow said the FOMC decision "recognizes the considerable progress that has been made toward restoring jobs, raising incomes and easing the economic hardships that have been endured by millions of ordinary Americans."

There was other news this week, principally a late season surge in residential construction numbers. The Census Bureau and HUD reported that permitting in November buried analysts' expectations by increasing 11.0% from October to a rate of 1,289,000 units. This was 19.5% above the rate in November 2014. Analysts had been looking for a number around 1,146,000 units.

The news about housing starts was even more welcome. After a terrible October in which starts were down by 11%, they were back up by 10.5% to 1,173,000 units in November. However, we may want to curb our enthusiasm. The gains were, as has frequently been the case this year, due largely to multi-family housing. Permits for units in buildings with five or more jumped 30.8% from October and starts were up 18.1%.

New home builders are certainly curbing their enthusiasm. The National Association of Home Builders Housing Market Index which measures new single-family home builder confidence dropped for the second month in a row and is now four points below the decade-long high of 65 it established in October.

We will be on hiatus until January 8. Relax and enjoy the holiday season. 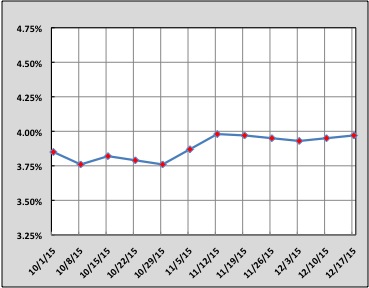