The Annual Report to Congress from Housing and Urban Development Secretary Julian Castro centered around some big news this week. The Mutual Mortgage Insurance Fund (MMIF), which backs up the FHA mortgage guarantee, has recovered to its legally required capital ratio, 2% of its outstanding mortgage balances, and did so a year earlier than expected. The housing crash and ensuing defaults and foreclosures had driven that fund to a -1.44% balance in 2012, ultimately necessitating a first-time ever draw on FHA's Treasury line of credit. The Fund has now recovered by $40 billion to a positive balance of $23 billion and a ratio of 2.07%. In the last year alone, the ratio improved by 1.66 percentage points.

The Census Bureau's report on October's residential construction was a bit of a mixed bag. Permits rose, up 4.1% from September, to a respectable seasonally adjusted annual rate of 1.15 million units. Housing starts were another matter, dropping a substantial 11.0%, missing even the most pessimistic analysts' prediction, and failing to match last October's rate by 1.8%.

The multifamily sector drove both numbers. Permits there were up 8.9% against only a 2.4% increase for single-family units, but starts in buildings with five or more units plummeted 25.5% from the September rate.

The correlation probably isn't strong, but new home builders lost some steam as well, taking back three of the four points they added in October to the National Association of Home Builders Housing Market Index (HMI). Two of the three components of the HMI, which measures builder confidence in the new home market, were down as well with the one measuring builder's expectations of sales over the next six falling by 5. Despite the setback the HMI remains above 60–a level it had been unable to attain for nearly 10 years until 2015's steady increases.

The gain in the October Consumer Price Index reported this week might widen their comfort zone should the Federal Open Market Committee (FOMC) move ahead as anticipated with a rate hike at its December meeting. The CPI was up 0.2% from September and the core CPI (which excludes food and energy prices) has now risen 1.9% year-over-year, very close to the Fed's 2.0% target for raising rates, one that had seemed elusive until now.

There are a slew of housing indicators crammed into the upcoming and short work week. We hope you agree that friends, gratitude, family, and turkey take priority; we will catch up on it all the following week. Have a wonderful holiday! 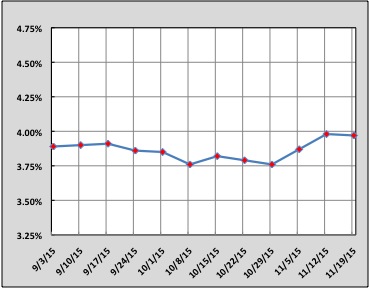